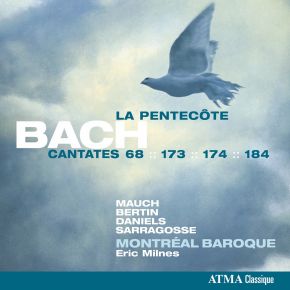 Seven Sundays after Easter Sunday, the religious holiday of Pentecost begins. Pentecost focuses on the idea that Jesus was not sent to judge the world, rather, he was sent to save it. Bach’s cantatas BWV 68, 173, 174, and 184 were all written for this holiday, and all are featured on this new release. This release is the sixth album in ATMA’s venture to record the sacred cantatas of Bach alongside the Montreal Baroque Festival. Using the latest scholarship on the original performances of Bach’s works, this cycle has been performed with historical techniques in mind. For example, the choral sections are performed by the four soloists with one singer per part.