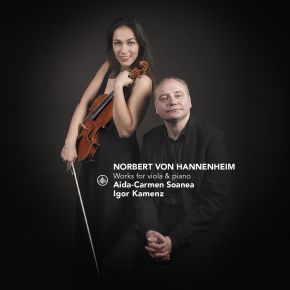 Blinded by racial fanaticism, the insane musical policy of the Nazis murdered, in concentration camps, or sent into exile, not only Jewish composers. It also stopped the careers of promising artists in a way, that any memory of them was almost completely extinguished. One of such tragic cases was the destiny of composer Norbert von Hannenheim. He was born in 1898 in Hermannstadt, Transylvania (actual Sibiu, Romania).
Arnold Schönberg thought of him as “...one of the most interesting and talented pupils...his talent, his seriousness, his productivity are certainly exceptional, and I think confidently, that he will have a word to say in the development of music, and that his work will carry through...”. In 1932 Hannenheim won a Felix Mendelssohn Bartholdy Prize. Hannenheim was German, but as he composed atonal music, he got under the curse of so called „degenerated music“ stream. As his complete oeuvre was practically destroyed, his life changed tragically. After suffering a schizophrenic attack he was committed to a mental institution Hannenheim survived the end of the war and died on 29 September 1945.
By pure chance some of his works have been rediscovered. The source was a festival in 2001 called „Berlin School-Arnold Schönberg’s Master students at the Prussian Academy of the Arts of Berlin“. The five works for viola known until now, represent a large part of it.
Hannenheim has a similar background of folk music as Bela Bartok. He was a master student of Arnold Schönberg and, as it is said, the only capable to contradict unrestrainedly his master. This connection between grounded musicality and authentic constructive thinking is rather uncommon. One should remember the name Hannenheim.

Aida-Carmen Soanea (artist)More information
Norbert von Hannenheim (composer)More information
Igor Kamenz (featured)More information
Adrian Pinzaru (featured)More information
01-06-2017 Fanfare Magazine
"With nothing to compare them to, I can only say that these performances bring the music to life. Aida-Carmen Soanea’s viola is warm and smooth; Igor Kamenz’s playing suggests a musical understanding well beyond mere chops—of which he has plenty. Well-balanced, intimate recorded sound rounds out a fine disc. I look forward to further exploration of Hannenheim’s almost-lost oeuvre."
27-01-2017 Nieuwe Noten
"The musicians on this CD feel the musical world of Von Hannenheim perfectly and render the pieces with a lot of empathy for detail."
01-01-2017 Journal of the American Viola Society
"Aida-Carmen Soanea and Igor Kamenz are a tried and true team that have immersed themselves in Hannenheim's unique sound world and bring it to fascinating new life."
01-11-2016 Fono Forum
""Aida Carmen Soanea and Igor Kamenz found here very differentiated overtones and expressive drama when the music it asks.""
03-08-2016 Pizzicato
"

So, this is a very special and attractive program with a guarantee for a rewarding listening.

"
20-07-2016 Opus Klassiek
"" [...] Everything makes a wonderful way to meet Norbert von Hannenheim [...] ""
05-07-2016 Het Parool
"Beautiful music, that you could could describe best as extraordinary lyrical dodecaphony, that makes you think of Bartok in the Duo fur Geige und Bratsche."