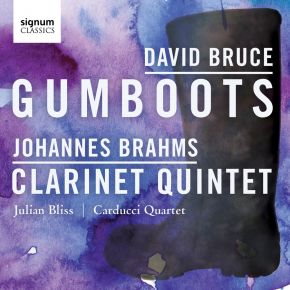 The two works on this release are highly contrasting- Johannes Brahms’s Clarinet Quintet and David Bruce’s Gumboots. David Bruce describes his inspiration for Gumboots: “…it was born out of the brutal labour conditions in South Africa under Apartheid, in which black miners were chained together and wore Gumboots while they worked in the flooded gold mines…slapping the boots and chains was used by the workers as a form of communication which was otherwise banned…this later developed into a form of dance.” Clarinetist Julian Bliss performs here alongside the Carducci Quartet.