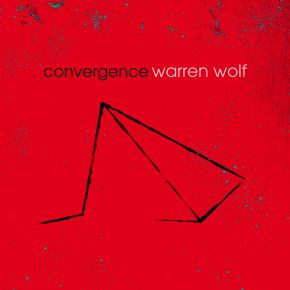 For a follow-up to his superb sophomore release Wolfgang, rising star vibraphonist/composer Warren Wolf finds himself alongside some of the biggest names in modern jazz for Convergence, his stellar third outing on Mack Avenue Records. Along with bassist Christian McBride, the all-world rhythm section is rounded out by master drummer Jeff “Tain” Watts and esteemed pianist Brad Mehldau. Renowned guitarist John Scofield is a featured soloist on two tracks.

After having the vibraphonist in his acclaimed Inside Straight quintet since 2007, longtime label-mate and mentor McBride produced the album and brought the band together to see how far Wolf could go. “It was a particular pleasure to bring Warren together with John Scofield and Brad Mehldau—two musicians he'd never worked with before,” explains McBride. “Warren's A-level musicianship clearly moves him into an echelon that musicians like Sco and Brad represent. I think the results were inspirational for all of the musicians involved.”

Together, they spur each other on to some dazzling heights on six Wolf originals and five well-chosen covers, running the gamut from funky soul-jazz to post-bop burners, intimate ballads and even a touch of classical. Convergence features some of Wolf’s most accomplished writing and dynamic playing to date, and his all-star sidemen rise to the occasion with some heat of their own from track to track. “What we wanted to do on this record is mix it up and not just have the whole band on every single track,” he explains—the album features everything from solo to quintet recordings, utilizing various configurations of this stellar lineup.

Convergence opens with the full quintet playing the funky boogaloo-cha “Soul Sister,” which is fueled by McBride’s inimitable deep groove and features some of Scofield’s nasty string-bending prowess. “I actually wrote that song a few years ago for a woman I was dating at the time,” Wolf explains. “She was just so bad...I mean that in a good way. She was so cool and just had all this soul about her. The song has a strong melody and is kind of bluesy, and I figured this would be the perfect song to have Scofield on, especially with his sound.”

The other quintet number, “Havoc,” is an aggressive fusion original inspired by Scofield’s “Trim,” a sizzling tune from the guitarist’s 1987 album Blue Matter that Wolf first encountered later on. This serves as a tribute to Scofield and brings Wolf back to his introduction to jazz back in ’93 when his father bought him a DCI instructional home video which featured the guitarist’s band from the ‘80s.

The expansive quartet piece, “Four Stars From Heaven,” evolves like a beautiful tone poem from an atmospheric opening to graceful waltz-time vehicle underscored by Watts’ simmering swing factor, gradually building to a kinetic straight eight feel that has the great drummer forcefully traversing the kit in typically Tain-like fashion. “I’m a father of four kids so I wrote this song as my gift from the creator above,” Wolf explains. “I was thinking about changing the name of the song because I’m actually expecting another kid soon. But for now it’s ‘Four Stars From Heaven.’”

“Cell Phone” is a blistering number that comes out of the gate charging hard and never lets up. This exhilarating quartet piece is fueled by Watts’ whirlwind polyrhythms and Mehldau’s insistent performance. The title comes from the vivid memory of a young woman at an airport with a cell phone that rang constantly, leaving such an impression on Wolf that the ringtone is essentially replicated by McBride’s bass line, and if you listen closely, you may even hear that familiar T-Mobile ringtone in Wolf’s solo.

Vibraphone legend Bobby Hutcherson’s mellow “Montara” is a chill trio number that has Wolf comping for himself on vibes while carrying the melody and solo on marimba. Following shortly after is “Tergiversation,” a briskly swinging trio number that features Watts on brushes at the beginning before he erupts in quintessential Tain fashion at the end of the piece. Wolf provides some vibes-on-vibes overdubbed accompaniment on this one.

Stevie Wonder’s lovely “Knocks Me Off Of My Feet,” featuring McBride and Watts, opens with Wolf exploring a bit before resorting to the familiar melody, and also engaging in some rapid-fire trades on marimba and vibes at the end of the piece. “I play an idea on the marimba and come back and play it on the vibes, going back and forth like that,” he explains. “So I was trying to cut myself, as they call it in the jazz business.” Wolf’s “A Prayer For The Christian Man,” the final trio piece on the record, is a brooding piece that carries an understated power in the vein of John Coltrane’s thoughtful dirge “Alabama.” Wolf plays piano, Fender Rhodes, vibraphone and marimba on this reflective number, which is underscored by Watts’ mallets work.

Wolf’s luminous duet with Mehldau on Dave Samuels’ “New Beginning” features some highly conversational playing between the two master musicians. “The whole point of Convergence is two minds coming together to form just one voice, and this song is a perfect example of that,” says Wolf. The jauntily swinging “King Of Two Fives” features Wolf and McBride in a buoyant old school dialogue that harkens back to the spirit of Duke Ellington’s duets with Jimmy Blanton. McBride’s contribution here has the bassist jumping back and forth from doubling the melody with Wolf to sticking to his fundamental role as a bass player.

For his finale, the lone solo showcase on the album, Wolf joins Hoagy Carmichael’s classic “Stardust” together with Chopin’s “The Minute Waltz” to stirring effect. He explains that the idea came about spontaneously on a gig. “We did a performance at the Savannah Music Festival and at some point I told my pianist Alex Brown, ‘Man, let’s play ‘Stardust.’ This looks like the type of crowd that would like it.’ And right at the end of the piece I went into a cadenza and started doing a trill on two notes. Alex picked up on that and started playing something that was very close to Chopin’s ‘The Minute Waltz.’ I knew that piece and Alex is a great classical pianist himself, so we started playing it together and just went ahead and played the whole song as a cadenza. People really enjoy the balance of going from grooving stuff to straight burning stuff. This whole record and my live shows are all about giving the audience a little bit of everything, not just one style of music or one type of jazz.

“I like to show that there’s always another side of Warren Wolf,” says the classically trained multi-instrumentalist, who has also been a member of the SFJAZZ Collective for the past two years. “I’m not just Warren Wolf the jazz musician who went to the Berklee College of Music and studied bebop, I’m Warren Wolf the musician who actually knows a lot of music from bebop to pop music, Motown, fusion and classical.”

Since graduating from Berklee, Wolf has taken the jazz world by storm, first as a sideman in Christian McBride’s Inside Straight quintet, then with his self-titled Mack Avenue debut in 2011 and Wolfgang in 2013. Now the vibraphonist-composer and multi-instrumentalist takes things up another notch on his excellent all-star outing, Convergence.