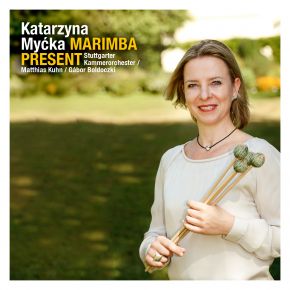 The internationally renowned marimba virtuoso and chamber musician Katarzyna Myćka is regarded as a truly exceptional talent on her instrument.

The musician from Stuttgart with Polish roots is respectfully known as "she who dances with the mallets" among experts in music criticism. "Perfect mallet technique" and "fantastic rhythmic precision" are more examples of the praise which the musician garners. That this praise rather understates Myćka's ability is demonstrated when she simultaneously produces up to six tones on her concert marimba, with its sixty narrow wooden bars and resonance pipes.

A rarely heard solo instrument, the Marimba reveals a quite extraordinary richness of tone and a fascinatingly broad palette of musical effects under the virtuoso's swirling mallets. The artistic elegance and dance-like energy of her playing places the audience directly under her spell.

After receiving training in piano and drums, Katarzyna Myćka discovered the marimba as her instrument, her ideal medium for musical expression, while studying at music academies in Gdansk, Stuttgart, and Salzburg. Numerous prizes and awards at international music competitions followed. She performed worldwide as a soloist at the main marimba festivals and also played as a soloist with renowned orchestras around the globe.

The large concert marimba is a very young instrument, and has only existed in its current form since the mid-1980s. Katarzyna Myćka has quickly become the leading pioneer and ambassador for the instrument. For her this includes a commitment to training young players as well as participating on juries at international competitions, but in particular the International Katarzyna Myćka Marimba Academy (IKMMA), which she established in 2003.

The artist’s multifaceted solo program includes not only transcriptions of the works of Johann Sebastian Bach and Sergei Prokofiev, but also original compositions by contemporary and younger composers.

I dedicate a lot of time and enthusiasm to collaborating with composers who explore and understand the special and marvellous sound of the marimba. The guiding principle in this is musical trust. That's why this album with compositions by Eric Sammut (*1968) Anna Ignatowicz-Glińska (*1968), Emmanuel Séjourné (*1961) and Ney Rosaauro (*1953) is like a gift for me. I've waited a long time to record these great concertos with such wonderful musicians, such as the Stuttgart Chamber Orchestra under the direction of Matthias Kuhn, and two-time ECHO Klassik prizewinner Gábor Boldoczki on trumpet. This also explains the album title Marimba Present, which I would like to dedicate to my daughter," said the artist, to whom numerous concerts and chamber music works have already been dedicated.

The composers themselves with short statements about their works which are presented here:

Eric Sammut – Sugaria
"Written in the summer of 2006, Sugaria contains different musical styles: American jazz, northern and southern elements, as well as some tones inspired by French romantic composers. With this work I wanted to express the way different phrasings on the Marimba can combine swing, romance, dance, virtuosity and rhythm. Thus, the three movements have very different characters."

Anna Ignatowicz-Glińska – Concerto for Marimba, Trumpet and Strings
"The concerto was written at the suggestion of Katarzyna Myćka and it is dedicated to her. It consists of two movements whose connection is underlined by their similar tempos and overall lengths, but which have different characters. The first movement, which gives a lively and moving impression, can be interpreted as the human struggle against fate. The second is more contemplative and describes an acceptance of the inevitability of fate, an awareness of the transience of things. The marimba plays a virtuosic solo role in both movements, and is accompanied and accentuated by the orchestra and the trumpet."

Emmanuel Séjourné – Concerto for Marimba and Strings
"In this concerto too, I've contented myself with two movements: one slow with strong phrasing, and one rapid with energetic rhythms. The lyrical spirit of Rachmaninov's music inspired the first movement of the concerto. Slow, sincere, and with long romantic solo passages. In the second movement my jazz rock and flamenco cultures dominate. It's fast, aggressive and rhythmic. A slow passage in the middle section allows the soloist the opportunity to freely improvise."

Ney Rosaauro – Concerto No.2 for Marimba and Strings
"This concerto has three movements, whose respective titles are inspired by Tai Chi (meditative Chinese movements). Each movement has its own musical theme, while the main theme is presented cyclically in the second and third movements. The version for a string orchestra is dedicated to Katarzyna Myćka, who can probably interpret my music best."