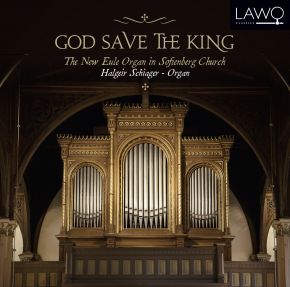 God Save the King

Today it is not unusual to use a Baroque model when building a new organ. Likewise, interest in Romantic organs has increased in recent years. The new organ in Sofienberg Church, built by Hermann Eule Orgelbau, is inspired by the sound of nineteenth-century German organs. As a new instrument, it is unique in the Norwegian context. Indeed, it is the sound of the new Eule organ that has determined the choice of repertoire for organist Halgeir Schiager’s new release, “God Save the King”- the first recording made on this magnificent instrument. The works on this album are variations on familiar melodies, among them, the American and German national anthems. They were written by composers who are largely forgotten today, but who were regarded as important in their own time. The album includes a number of first recordings.