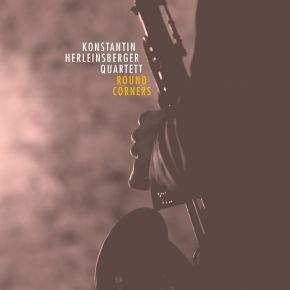 The debut album Round Corners by the young Konstantin Herleinsberger, bandleader of his similarly named quartet, once again proves that youth, artistic maturity and musical depth don't have to be contradictions.

Appearing here as both a composer and bandleader, the tenor saxophonist Konstantin Herleinsberger and his three fellow musicians (Andreas Feith on piano, Peter Christof on bass, and drummer Dominik Raab)  have successfully made a precision landing in the world of modern jazz. With the seven original compositions on Round Corners, they have proven on their first run that they are the equals of the international greats of their craft.

Using different compositional approaches, they develop arrangements together for their modern, straight-ahead sound, and create the individual tonal formula for their musical virtuosity.

The basic idea of Round Corners is based on Coltrane changes, which are here reduced to minor chords. Green Wind arises from a framework of harmonic sequences on the piano which, with an effortless virtuosity, build up and weave through the melody. Express employs chromatically rising dominants for an unusual chordal bond, and that in 7/4 time too. Moca Bonita surrounds you with the smooth nonchalance of Bossa Nova.

The quartet first formed in 2014 around Konstantin Herleinsberger of the Nuremberg jazz scene, the musical home of all four of the artists. By 2015, they were already shining as winners of the LAG Jazz Prize, the awarding of which included a tour through the renowned jazz clubs of Bavaria.

The great success of the tour, with its on stage intensity and interaction with an enthusiastic audience, added the crowning touch to their debut album Round Corners. And this shouldn't be seen as the logical culmination of their experiences, but rather as the promising beginning of a brilliant musical career for the Konstantin Herleinsberger Quartett.