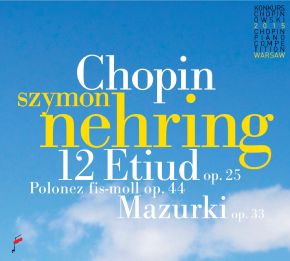 Poland had three contestants left in the Third Stage of the 17th International Fryderyk Chopin Piano Competition, and only one went through to the Grand Final concerto round. So the country’s hopes were resting on Szymon Nehring, and although few would have tipped him as a winner he enjoyed understandable support in the hall and countrywide, winning the Audience Prize in the final analysis. The Kraków-born pianist, who had just turned 20 when the competition opened, certainly aroused interest with his playing. Reviewing his Second Stage appearance in the Chopin Courier, Kacper Miklaszewski said, ‘The search for subtlety took away a bit of clarity from the interpretations of Szymon Nehring, who nevertheless built a convincing dramaturgy in the Polonaise in F sharp minor.’ Getting across all the hurdles in this most demanding of competitions, Nehring certainly proved his worth by the time he stepped out to play the Piano Concerto in E minor in a performance that mixed muscularity and gracefulness. Showing qualities that in retrospect can also be found here in performances recorded earlier in the competition, he found the sweep of the concerto’s first movement and the dreaminess of the second, before dispatching the rhythms of the finale with a natural, native flexibility. It was a well-rounded performance that justified his place as a laureate.