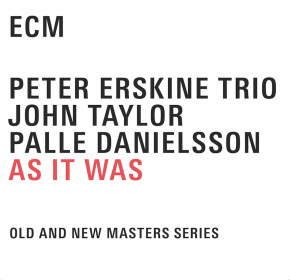 The newest addition to ECM’s popular Old and New Masters Series is a box set reprising the four albums made by Peter Erskine’s American-British-Swedish trio with John Taylor and Palle Danielsson between 1992 and 1997: You Never Know, As It Is, Time Being and Juni. If its core concept – a piano led by a drummer – was unorthodox, the group was nonetheless influential, and the recordings provide an excellent environment for appreciating the distinctive writing and playing of John Taylor. The British pianist was the Erskine Trio’s primary composer, with the drummer-leader and bassist Danielsson also contributing pieces and the repertoire topped up with tunes by Vince Mendoza and Kenny Wheeler.

On the day of the interview, Erskine is awarded an Edison for the 'As It Was' CD. This four-piece, in which the drummer made his mark on the already impressive spheres of diversity, provides an overview of the records he recorded between 1992 and 1997 with his own trio (with bass player Palle Danielson and pianist John Taylor). He is impressed when the statue is handed over. Really amazing and what a nice surprise.

"
16-10-2017 Slagwerkkrant
"On 'As lt Was' we hear the transparent sound of Erskine undeniable. Is there something to reveal about how you do this? "If you make an ECM record, you actually already hear how it will sound. What you play is what you get."
25-08-2017 Slagwerkkrant
"Edison for Peter Erskine"
18-07-2017 Drummerzone
"The Peter Erskine Trio, with John Taylor and Palle Danielsson, received an Edison (the Dutch Grammy) for their 4cd box 'As It Was'."
02-11-2016 Heaven
""It makes As it Was to a prudent purchase that  jazzlovers of the classical jazztrio certainly will like.""
19-10-2016 Trouw
"5 stars*****
"It is logical that a listener focusses the attention on what is being played by the musicians. But the essence of the Peter Erskine Trio is in what is NOT played but what is there all the same.""

13-10-2016 Music Frames
""But also the psalm laced ballads, folk, rhythmic pieces (with rock and gospel) alternates a tasteful parade of interesting pieces that are worth listen more than once.""
24-09-2016 Rootstime
""This is a great chance for anyone who does not have many albums of the trio at home, this geat music belongs to the best of jazz music.""