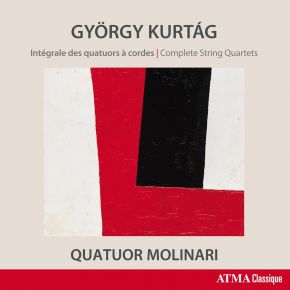 In recent years, 90-year-old Hungarian composer Gyorgy Kurtag has devoted his efforts almost entirely to the composition of chamber music. On this new release, the Molinari Quartet presents Kurtag’s entire string quartet catalog. Gyorgy Kurtag has been strongly influenced by the Second Vienna School, particularly Webern and Schoenberg, as well as Pierre Boulez. His first string quartet was composed in 1959 and was the first groundbreaking piece in his career. The series of quartets which followed was largely dedicated to composers, performers, and friends who he admired. “Kurtag’s music is always very personal, immediately recognizable, and stamped with characteristic depth and expression.” (Olga Ranzenhofer, Molinari Quartet)