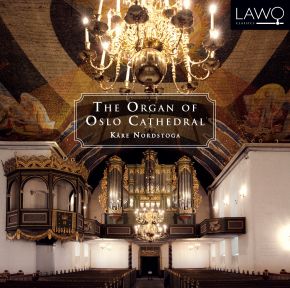 On this new release, organist Kare Nordstoga plays a variety of famous works by Bach, Grieg, Reger, Gounod, and others to showcase the beautiful organ in Oslo Cathedral. The main organ in Oslo Cathedral was built by Norwegian organ builders Ryde & Berg in 1998. The organ façade is the original one from the Baroque organ of 1727 built by the Danish organ builder Lambert Daniel Kastens, who studied and worked with the famous North German organ builder Arp Schnitger. Kare Nordstoga studied at the Norwegian Academy of Music with Soren Gangflot, Bjorn Boysen, and Kaare Omung, among others. Following his debut concert in 1978, he continued his studies under David Sanger in London, and he was for a time organist at Ullern Church, before coming to Oslo Cathedral in 1984. He has also been associated with the Norwegian Academy of Music, where he was appointed professor in 1994.

The three short Norwegian pieces are all quite tonal and conservative, and appear to be well done. The recorded sound is excellent; the booklet notes are perfunctory.