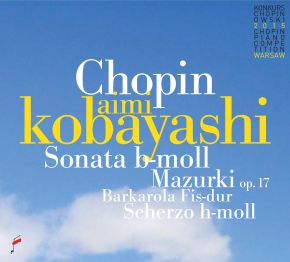 Aimi Kobayashi – a musical portrait of one of the most interesting participants in the 17th Fryderyk Chopin International Piano Competition.
The 20-year-old Japanese pianist, enjoying great audience approval, was among the favorites already from the first round; according to well-known British critic John Allison, ‘her taking part in the final and winning an honorable mention was one of the most predictable elements of the entire Competition’. Already as a 13-year-old pianist, Aimi was revealed to the Polish audience by The Fryderyk Chopin Institute when she performed Wolfgang Amadeus Mozart’s Piano Concerto in D minor with the Orchestra of the Eighteenth Century at the Chopin and His Europe festival. Her Competition disc includes, among other works, the Sonata in B-flat minor op. 35 and the Scherzo in B minor op. 20.