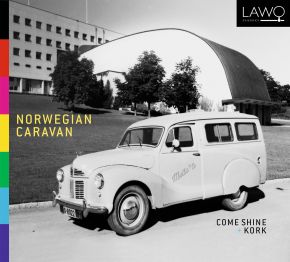 Since their 1999 debut concert, Come Shine and their unconventional versions of standard jazz tunes have been a favorite to a wide range of Norwegian music lovers. They released three best-selling jazz albums during their first four years- including one album with the Norwegian Radio Orchestra live at Kongsberg Jazz Festival 2003. The quartet took an indefinite break in 2004. After their reunion eight years later, the Come Shine sound had become darker, groovier and influenced by several other genres than jazz. The music on this symphonic album is the result of three sources combined: some of last century’s most talented song writers, Come Shine’s many years of cultivating their band, and piano player Erlend Skromsovoll’s unique arranger skills. Known to Norwegians as “KORK,” this orchestra is cherished throughout the country. The orchestra regularly plays at important media events such as the Nobel Peace Prize Concert, at their own public concerts in the “Sto