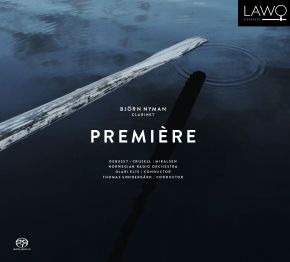 Finnish clarinetist Bjorn Nyman and the Norwegian Radio Orchestra present works for clarinet and orchestra by Claude Debussy, Bernhard Henrik Crusell and Jan Erik Mikalsen. Although Premiere Rhapsodie was the first solo work he wrote for clarinet, Debussy was able to use the clarinet’s sound properties and colors in a unique way. He described the work as one of the most charming he ever wrote. Crusell’s Clarinet Concerto Op. 5 is rather lyrical despite the fact it is in the key of F minor, known as one of the more dramatic keys. As Crusell wrote this for himself, the composition paints a picture of him as both performer and composer. Mikalsen’s Clarinet Concerto (2009) was commissioned by Bjorn Nyman and the Norwegian Radio Orchestra. The work came about after Bjorn Nyman had premiered another of Mikalsen’s composition, Themes for clarinet, piano and string quartet, which in turn inspired him to order a clarinet concerto. This is the World Premiere Recording of th