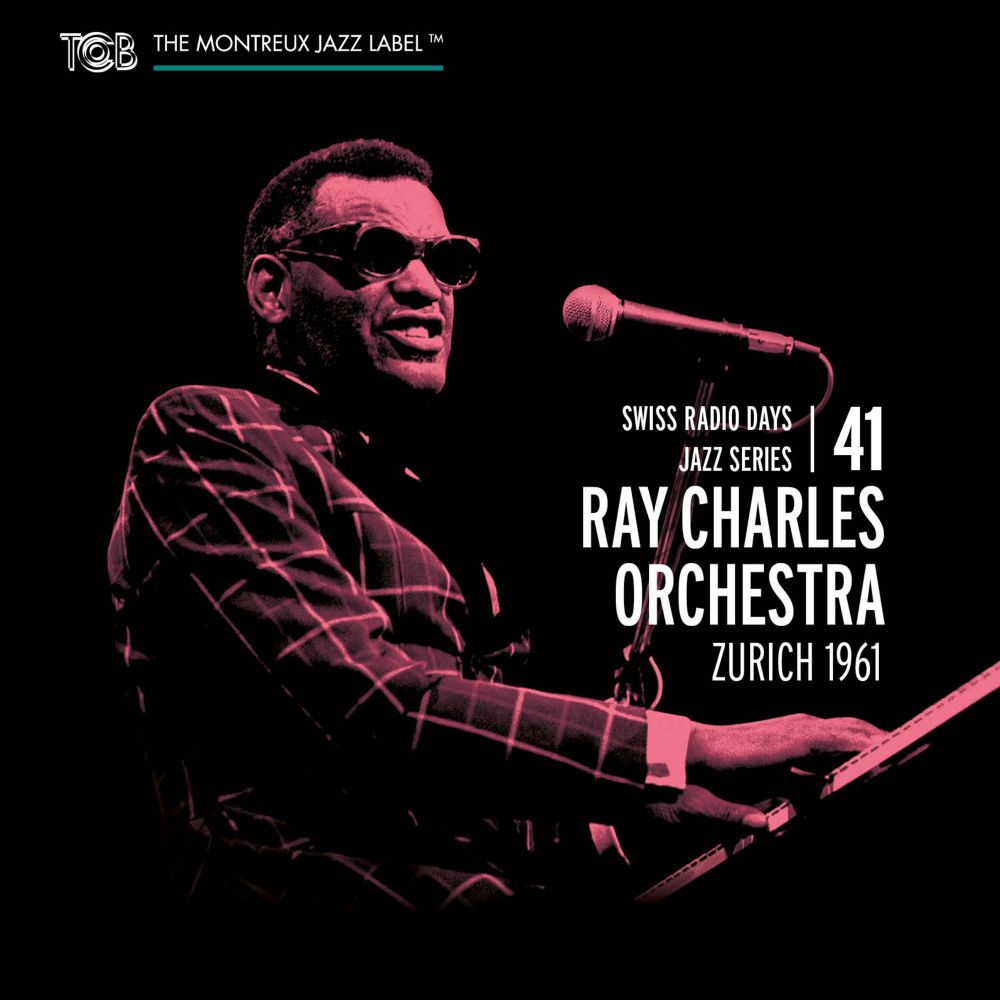 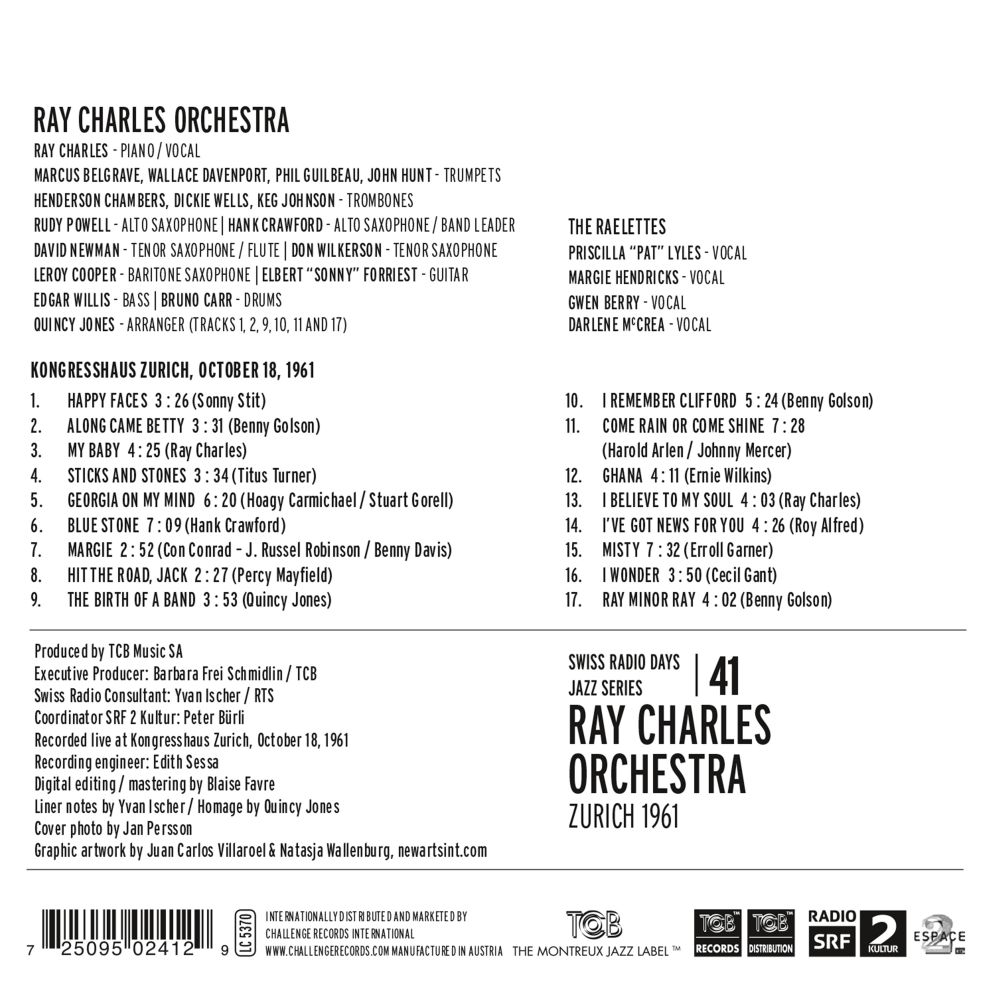 "This recording is considered a landmark in the career of Ray Charles."

This release contains legendary concert recordings by a young Ray Charles and his big band in Zurich, 1961. This concert was the start of a tour that would be crucial for Charles and his career - he was about to become a big world star. Ray Charles - The genius, best known for his hits like Hit the Road Jack, I Got a Woman and Georgia on My Mind - was a rising star when performing in Zurich with his big band in 1961. The big band on this release, appeared to be an ideal platform for what he had in mind to create jazzy music that he would mark with his own stamp by adding vast touches of soul and rhythm'n blues. With a remarkably balanced repertoire and brilliantly devised full orchestral tutties, at the time of this tour, Ray Charles' Big Band was at it's peak to deliver the singer's deliberately flashy musical credo 'Genius Soul = Jazz'
Mit der Big Band cam Ray Charles, das Genie hinter Hits wie 'Hit The Road Jack', 'I got A Woman' und ' Georgia On My Mind', seinem musikalischen Credo 'Genius + Soul = Jazz' am nächsten. Das stellt diese Aufnahme von 1961 unter Beweis, die zu einer Zeit entstand, in der Charles einer der aufgehenden Sterne am Musikhimmel war. Der gewaltige Sound der Big Band mit seinen Orchester-Tuttis ermöglichte ihm seiner Vorstellung eines Jazz mit Einflüssen aus Soul und Rhythm'n'Blues zu versehen und ihm somit seinen ganz eigenen Stempel aufzudrücken.

RAY CHARLES The Genius ... The year 1961 will be crucial, for he will soon be known throughout the world as "The Genius". Ray Charles and his group will beat the Antibes Jazz Festival in July and for four nights the cameras of Jean-Christophe Averty will capture the musical essence of the singer about to become a superstar. His "passport" to France and his route to glory on the Old Continent is virtually set. At a point three months later, our man is back with a big band on a European tour that, as luck would have it, will start up in Zurich on October 18 before two concerts at the Palais des congrès de Lyon (Lyon Convention Centre) on the 19th and a series of historical performances at the Palais des Sports in Paris. Initially scheduled for the 20th to 22nd, the Ray Charles band will extend their stay until the 24th in response to demand by the public amidst a particularly tense atmosphere outside the auditorium, as Paris is at odds during this period of the Algerian War… The Palais des Sports itself is the site where thousands of demonstrators are being detained until the very morning of the first concert. However, "Brother Ray" will benefit from this kind of growing passion; the Algerians themselves will be sending a message to the singer's promoter to let him know that there would be no explosions targeting his route from his hotel to the concert hall, a story Ray himself will tell later in his autobiography, "Brother Ray". 41 It must be said that Ray Charles made people talk and appealed to his brotherhood; his message was without outrageous demagoguery and put the emphasis on love and bringing together individuals and people. In this context, he and his musicians, like all African American artists arriving in Europe at the time, were shocked to find audiences that adored them without any kind of racial distrust or restrictions. Moreover, the venue for Ray Charles had been expertly orchestrated by producer Frank Ténot, also known as "the man who loved jazz" (from the title of his book, "Celui qui aimait le Jazz"). This was a man who did not hesitate to travel to Washington in November 1960 to uncover the flesh and notes of the pianist-singer who had lit up the music world and who would be coming to Europe in the wake of this to present himself to the European public. Therefore, it was largely thanks to Frank that on October 18, 1961 the crowds at the Zurich Kongresshaus were able to discover the extraordinary development of "The Genius" who, at the end of 1962, would be a member of the agency of a certain Norman Granz…. "The Stairway to the Stars" was wide open. Ray Charles was also effectively at a crossroads in the year 1961 yet his musical program was not lacking in panache. At any rate, it was taking a chance to hit Europe with a genuine big band, the Rolls Royce of jazz units. This appeared to be an ideal platform for what he had in mind, specifically the reunion of dance and "groovy" from their dual roots in the jazzman and the bluesman, to create a music that he would mark with his own stamp by adding vast touches of "soul" and "rhythm'n blues". In so doing, he would contribute to revolutionizing this "Great Black Music" that he held so dear. His shift from Atlantic to ABC Paramount record labels was also no accident and at the time, he was hoping to unite the public and accomplish the feat of singing in his "black" style some songs that had just been identified as belonging to a repertoire of "white" songs, thus abolishing ugly ethnic social barriers that weighed so heavily on the African American artists of the time. The result would not be long in coming for Ray Charles, with his long-lasting regular successes cascading through the decades…

This recording is considered a landmark in the career of Ray Charles.
Smooth Jazz, 03-4-2017

(...) But even better, Brother Ray and company slowly unroll several mournful blues heavy enough to flatten you. From the leader's stark and lonely self-accompanied first verse through the band's closing eruption of sound and emotion, "Come Rain or Come Shine" stretches into eight minutes of agonized yet joyful blues. (...)
All About Jazz, 17-3-2017

This is Ray, just as he's breaking big in the States, in fine voice, backed by a stellar big band.
Stereophile, 20-1-2017

These arrangements are beautiful.
De Volkskrant, 13-1-2017

''But inspited performances by the leader, his go-for-the-throat band and the delightful Raelettes more than make up for this technical flaw.''
Down Beat, 07-12-2016

Best Rating: 4 **** stars "Six of the seventeen tracks presented that evening were arranged by Quincy Jones and others were from charts of Ernie Wilkins. This was a fit band ready to tackle the continent."
Audiophile Audition, 17-11-2016

Best Rating: 4 **** stars The eclecticism of Ray Charles around this time was amazing in every way and is an effortless excitement in a way that no other leader and band is now.
Buffalo News, 03-11-2016

From start to finish, the Rhythm Section is immaculate, even with the most demanding arrangements by Quincy Jones or Ernie Wilkins, especially drummer Bruno Carr.
Jazz Fun, 01-11-2016

...Just before the climax of his career, the 'genius' in an authentic way.
Jazzpodium