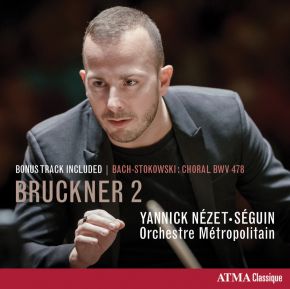 With the release of Symphony No. 2 performed by the Orchestre Métropolitain under the direction of Yannick Nézet-Séguin, ATMA Classique continues its cycle of the complete symphonies of Anton Bruckner. Nézet-Séguin was recently appointed Music Director of the Metropolitan Opera in New York, a post he will assume in 2020.
The previous recordings of Bruckner’s symphonies by the OM/YNS team have won unanimous praise from critics worldwide, and have established Yannick Nézet-Séguin as a brilliant conductor of Bruckner. “This is a very beautiful Bruckner Fourth Symphony, by an increasingly interesting Bruckner conductor. It's refreshing to hear Bruckner's orchestral writing brought to life on so many levels, captured faithfully by the recording.” — BBC Music Magazine
As a bonus track, the sacred piece “Komm, süsser Tod, komm, sel'ge Ruh”, (“Come, Sweet Death, Come, Blessed Rest”) BWV 478 by J.S. Bach – in a Leopold Stokowski’s orchestration – is also included exclusively on the digital version of the album.