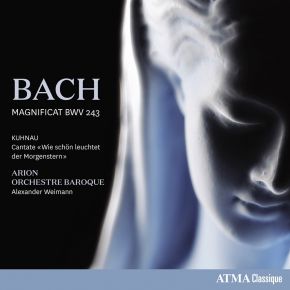 Bach reworked his Magnificat BWV 243a in E-Flat major, originally composed in 1723, transposing it up to D major and slightly modifying the isntrumentation. In this revised version he omitted the four interpretations or Christmas laudes. On this recording, directed by Alexander Weimann, Arion performs the version in D major and reintroduces the four all-too-rarely heard laudes. Founded in 1981, Arion Baroque Orchestra is the only period instrument orchestra based in the province of Quebec. The clarity and freshness of Arion's interpretations have been remarked upon since it's first concerts. The delicacy and artistry of it's readings of well-chosen and varied works has been consistent over the past 35 years. Alexander Weimann is one of the most sought-after ensemble directors, solists and chamber music partners of his generation. After traveling the world with ensembles, he now focuses on his activities as conductor of the Pacific Baroque Orchestra Vancouver and as music d