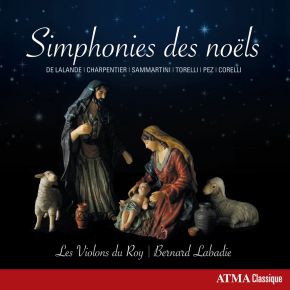 This album is a reissue of Simphonies des noëls, the first recording with Les Violons du Roy on the ATMA Classique label. Plain-chant has figured prominently in the church's Christmas celebrations since the Middle Ages. Eventually polyphonic motets became popular and by the Baroque era, cantatas, concertos or variations on songs well known to the faithful were added to the liturgy. Simphonies des noëls features instrumental works celebrating the nativity by composers from France, Italy and Germany. Les Violons du Roy is at the heart of the music scene in Quebec City and is a regular feature on the Montreal cultural calendar. The orchestra is known throughout North America thanks to the many broadcasts of it's concerts and recordings on CBC, Radio-Canada and NPR. The ensemble regularly visits to New York City, Chicago and Los Angeles.