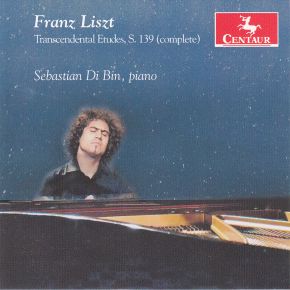 Italian pianist Sebastian Di Bin provides us here with an intriguingly beautiful performance of Franz Liszt’s complete Transcendental Etudes. Sebastian Di Bin has dedicated this album to the memory of his brother, Francois, who passed away in March 2015. The composition of Liszt’s twelve Transcendental Etudes began when the 15-year-old composer composed a set of much less difficult exercises titled the Etude en douze exercices. These works were elaborated upon to become his Douze Grandes Etudes in 1837, then finally revised and republished in 1852 as the etudes performed here.