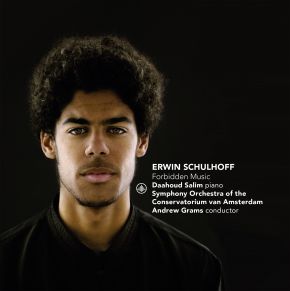 Schulhoff’s music remained a well-kept secret for many years, due in part to its apparent eclecticism. Fortunately, that situation has changed over the last twenty years of so. This release from the Conservatorium van Amsterdam contains piano works from the period 1920-1931, an extremely fruitful period during which Schulhoff gave vent to his fascination for the new jazz and dance music without entirely losing signt of classical tradition. He was a brilliant pianist himself, making frequent appearances in the concert hall and later in radio studios, renowned for his immaculate technique, fabulous memory and prowess as an improviser. The combination of classical foundations and more decorative jazz elements in Schulhoff’s music suits Daahoud Salim Alvarez down to the ground, as he studied both classical and jazz piano at the Conservatorium van Amsterdam. Schulhoff constantly faced the dilemma of respecting traditions while at the same time being keen to distance himself

I have enjoyed the pianists playing here in Århus, Denmark, and am looking very much forward to hear this Schulhoff music wíth the sad circumstances but also uplifting, for the will to make music survives everything.