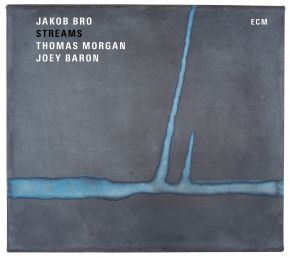 On his second leader album for ECM – following on from the prizewinning Gefion - Danish guitarist Jakob Bro continues to refine his trio project, with its emphases on melody, sound, space, layered textures and interaction. The rapport between Bro and Thomas Morgan (Bro calls him “my musical soul mate”) has become something extraordinary, and often guitarist and bassist develop improvisational ideas in parallel. There’s an historical aptness, too, in the choice of Joey Baron as the band’s new drummer, for Bro first encountered Morgan when the bassist was playing in Baron’s band a decade ago… On Streams Joey Baron dives into the music’s detail with obvious pleasure. This recording features five new Bro pieces: “Opal”, “Full Moon Europa”, “Shell Pink”, “Sisimiut” and “Heroines” (heard in both a trio version and a particularly lovely solo version). Completing the album’s repertoire is the freely improvised “PM Dream”, dedicated to the late Paul Motian. Jakob’s approach to melody acknowledges the influence of Motian, and both Bro and Morgan played in the late drummer’s ensembles .

Jakob Bro (composer)More information
Thomas Morgan (featured)More information
Joey Baron (featured)More information
19-11-2017 Trouw
"Crystal clear and subtle as a drop of water"
30-10-2017 JazzFlits
"The concert was mostly modest, founded on the sensibilities of the guitarist, who showed particular space, tranquility and class."
01-01-2017 Gitarist
"''Beautifly touching.''"
01-12-2016 Jazzmozaiek
"4****stars
"Among jazz lovers the name of Jakob Bro is already buzzing around for years as being one of the moost special gitarists inside the jazz scene."
"

21-11-2016 Trouw
""For years he is an atypical jazz guitarist, but also one of the best. He knows how to create atmosphere. Exactly how he can escape imminent predictability. A matter of timing and concentration. And the guts to not wanting to impress.""
18-11-2016 Jazznu
""The music of the Jakob Trio is to sit back and to enjoy fully the artistically wrapped surprises."     "
30-10-2016 Cutting Edge
"The guitarist is determined to break away from conventional songs with predefined structures, from clear rhythms, from stereotypical laps of improvisation. In short: getting rid of as many agreements as possible.  Only in this way, in the most complete freedom, can what the moment asks be created in the moment. This is about how the philosophy of Bro, Morgan and Baron can be put into words."
28-10-2016 Jazzism
"Also in the Netherlands is the glow of his exceptional sound starting do do its work and wil the listeners become enchanted."
06-10-2016 Written in Music
""This is jazz of an exceptional class, an album for the eternity.""