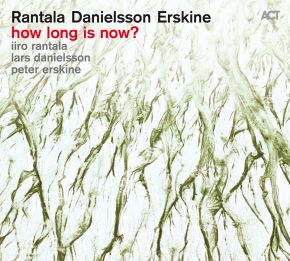 how long is now? (vinyl)

“How long is now?” puts a spotlight on the Finnish pianist, composer and life-force Iiro Rantala, and on what is evidently a happy and resoundingly creative phase in his life. Rantala has described clearly what he wants to do as a composer: to write “simple melodies that people can remember,” and there are several fine examples with catchy hooks on this album. For example, he has set out to capture the contrasting personalities of each of his two young sons Bruno and Topi. There is also joy in lively, buoyant tunes such as “A Nut” and “Snapchat”. And a feature present throughout the album - and which was apparently much in evidence at the sessions too - is Iiro Rantala’s winning sense of humour.
Seven of the thirteen compositions here are by Rantala himself, three tracks by the other players in the trio, and three more by others who, in their different ways, have helped to construct Rantala’s appealing musical personality: Jimi Hendrix, Kenny Barron and Johann Sebastian Bach. Hendrix’s “Little Wing” is a reminder that Rantala has very strong roots which are well outside the jazz tradition. Rantala’s take on Kenny Barron’s “Voyage”: “It’s a mixture of Finnish Tango and...well… ‘Voyage’,” says Rantala. The “Kyrie” from the “Mass in B minor” is the memory of a formative moment: “I started my life in music singing Bach at age of seven in a boys choir.”
Rantala’s also wants to take a jazz trio in a specific direction: “The main idea,” he says, “is to avoid the basic concept of the jazz piano trio, and to make it more groovy, with simple melodies.” Rantala was also thrilled to have the opportunity in June 2015 to do just two concerts and this recording with the drummer Peter Erskine: “I love Peter Erskine’s playing,” he enthuses. “I grew up listening to him. Steps Ahead, Weather Report and particularly Word of Mouth.” The bassist of the trio is another consummate musician, Lars Danielsson, whose playing is consistently both subtle and authoritative, and who has contributed two tunes, a brief evocation of a Nordic winter morning, and a piece celebrating the confluence of East and West in music in Istanbul.
In “How long is now?”, Rantala, Erskine and Danielsson have produced a thoroughly life-affirming album.