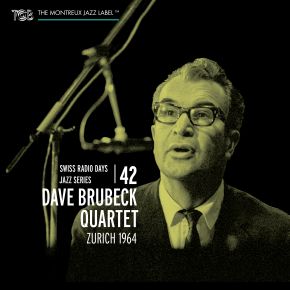 The Swiss Radio Days album features the great Dave Brubeck Quartet with Dave Brubeck on piano, Paul Desmond on alto saxophone, Eugene Wright on bass and Joe Morello on drums. The recording of this concert immediately brings you to a world of magic conjured up by one of the most beautiful sounds in the history of music: Paul Desmond’s alto saxophone, which transcends his own song “Audrey” from the very first notes. At the time of this recording in 1964 in Zurich, the collaborations between Dave and Paul were not new as they already had crossed paths in 1944 in a military musical context where they jammed for quite some time. Dave Brubeck was an American jazz pianist and composer, considered to be one of the foremost exponents of cool jazz. He wrote a number of jazz standards, including “The Duke,” and “In Your Own Sweet Way.” Brubeck’s style ranged from refined to bombastic, reflecting his mother’s attempts at classical training and his improvisational ski