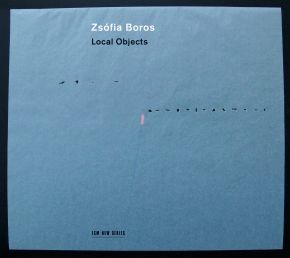 The second album from the Hungarian-born Vienna-based guitarist finds her embracing a broad scope of music, broader even than on her outstanding debut En otra parte. This time the range extends from contemporary composition to jazz ballad via music from Brazil, Argentina, Italy and Azerbaijan - all embraced with imagination and creative flair. Pieces played here by Zsofia Boros include Egberto Gismonti’s challenging “Celebração de Núpcias” (made famous on Dança das cabeças), Franghiz Ali-Zadeh’s “Fantasie”, Al Di Meola’s “Vertigo Shadow”, and Carlo Domeniconi’s Turkish-influenced “Koyunbaba”. These Local Objects are rendered universal by Boros’s subtle and sensitive playing in an album recorded at Lugano’s Auditorio Stelio Molo in November 2015 and produced by Manfred Eicher.

Zsófia Boros (artist)More information
Various composers (composer)More information
01-02-2017 Luister
"This CD contains not only the most beautiful registration ever of Domeniconi's Koyunbaba, but also the most fascinating program ever."
01-01-2017 Gitarist
"''Magnificent.''"
03-11-2016 NRC Handelsblad
""Her new album embraces apparently the whole world, but again Boros knows how to force an unit." "