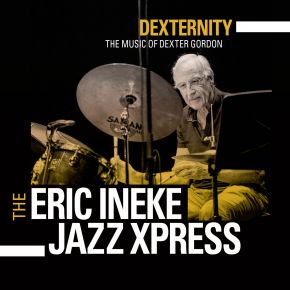 Dexternity is a tribute by 'the working band drummer' Eric Ineke. This tribute includes some of Dexter’s signature compositions including Fried Bananas, The Panther (composed in tribute to the Black Panthers), Tivoli, Boston Bernie, Sticky Wicket, Soy Califa, Mrs. Miniver, and Cheese Cake. They have also included the classic Body and Soul,  the composition that “must” be played every night, according to Dexter Gordon.

Rob van Bavel (featured)More information
Marius Beets (featured)More information
Eric Ineke (featured)More information
09-01-2017 Jazz Journal
"The Gordon legacy, of course, consists of umpteen performances by the great man, but this evocation of his writing, and with vigorous interpretations to match, is a contemporary reminder of his significance as a jazz force that continues to have relevance and exert lasting influence."
01-01-2017 Slagwerkkrant
"''The result is phenomenal.''"
01-12-2016 Music Emotion
"''This tribute album shows a number of Dexter's biggest works.''"
31-10-2016 Jazzenzo
""The Eric Ineke JazzXpress is a sparkling ensemble that brings old happiness into the Dutch jazz and that brings the music of the great masters alive.''"
17-10-2016 Jazzflits
"Swinging and bursting and thereby forgetting about the daily rush."
17-10-2016 JazzProfiles
""Imagine my delight, then, when drummer Eric Ineke contacted me from his base in The Netherlands to share with me that his working group - The JazzXpress - had just released a new CD featuring ten original compositions by none other than Dexter Gordon!!""
11-10-2016 Jazzhalo
"Jazzhalo / 11-10-2016"