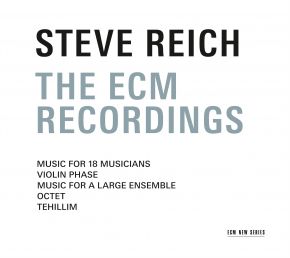 It was with ECM that Steve Reich first found a home as a recording artist, in 1978, forming a relationship that was sustained through the three albums collected here. We may have trouble now remembering, or imagining, the difficulty Reich's music presented to record companies at that time, even though the composer was into his forties and had been touring internationally to great acclaim for several years. The music was certainly not difficult, to understand or to feel, as the standing ovations proved; it was difficult, rather, to categorize. Reich had studied with Luciano Berio, but his work evidently had little connection with what was still called the 'avantgarde'. At the same time, it did not belong in the experimental tradition (a paradox widely accepted) that semmed from John Cage. And though boldly exposed its connections with rock and with non-western music, especially West African drumming and Indonesian gamelan, it could not be counted as popular or ethic.