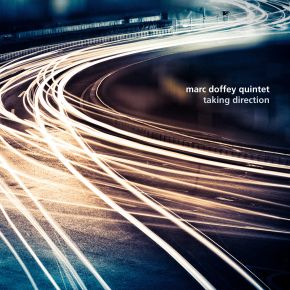 Taking Direction – a wisely chosen title for the debut album of the young and brilliant group formed around the Berlin saxophonist Marc Doffey. On the one hand it is a statement about the unity and adaptability which the five musicians share, while on the other, it follows up on the last line from the lyrics to 5 Perspektiven by singer Sabeth Pérez, whose musical touch and interpretation lie at the heart of this production. This cycle of pieces is selected from the quintet's beginnings, so from within the last two years, with the unique aesthetic of their lyrical and fluid character already on display.

There are as many perspectives and ways of thinking as there are ways of expressing yourself through words and sounds. The Marc Doffey Quintet takes full advantage of these conditions and draws from the musical wealth that each of the five artists brings, be it through composition, interpretation or improvisation. They provide a virtuoso example of this approach with 5 Perspektiven.
Each band member contributes a composition to prose penned by singer Sabeth Pérez, all of which move through the idiom of modern and lyrical jazz. This common language allows the freedom to shift various thematic emphasis and musical preferences to the fore without ever interfering with the main thrust of the band's sound. Presenting both sides of themselves, as it were, like the way the supporting leg carries and balances the eccentricity of the moving leg during a dance. The 5 Perspektiven heard on the album are embedded in a suite in which brief improvised interludes momentarily offer strong contrasts to the listener. These are to be taken as nods and references to the spontaneity and diversity of the group's live concerts.

The impetus for this album was the ever-growing success of the band's live performances of this very same program which, in October 2015, was awarded the winning vote by a prestigious jury at the Saar Jazz Prize.

Sabeth Pérez (vocals) and Marc Doffey (tenor sax, clarinet, bass clarinet) began their musical careers in NRW and met regularly in various ensembles, most recently in the Federal Jazz Orchestra in 2015. There they also met guitarist Bertram Burkert (electric and acoustic guitar), whose fine melodic flair plays such an important part in this band. With Thomas Kolarczyk (double bass) and Fabian Rosch (drums), they also have onboard two high-class and much sought after Berlin musicians, who tour and gig with various bands in diverse genres.

Playing with numerous national and international big bands, orchestras and outstanding soloists, the five members of the Marc Doffey Quintet have already accumulated a level of musical experience that will undoubtedly propel them to the summit of the jazz Olympus.