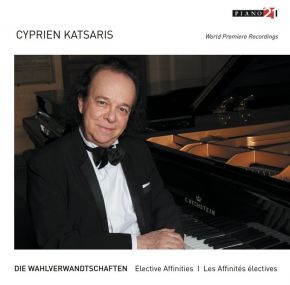 The title of Elective Affinities (Kindred by Choice), Goethe’s celebrated novel, harks back to the science of chemistry in the early days of the19th Century. It refers to the phenomenon that can result when two chemical compounds come into contact. If the affinity is strong enough, elements may detach themselves from either compound, free to combine anew with each other.
The programme for this CD attempts something similar, taking pieces out of context and juxtaposing them in twos, threes or fours with other compositions from different eras and cultural backgrounds. At stake is the possibility of unveiling new, underlying affinities having to do with the inspirational sources, musical genres, style or sentiments expressed in these pieces. Thus we find Schumann rubbing shoulders with Poulenc, Ravel and Jianzhong Wang revisiting the Far East, Liszt and Johann Strauss the Younger delving into the particular in quest of the universal. As the cherry on the cake, Katsaris pays homage to Chopin and Rachmaninov in two of his own compositions... which in turn offer resonances of two other composer-pianists, Tchaikovsky and Godowsky!