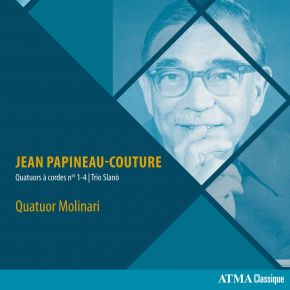 ATMA Classique is proud to join the Canadian Music Centre in paying tribute to Papineau-Couture’s remarkable contribution to Canadian musical life. He began teaching in 1945, first at the Conservatoire de musique à Montréal and then at the music faculty of the Université de Montréal, where he served as professor, vice dean, and dean. He was a founding member of the Canadian Music Centre, founding president of the Société de musique contemporaine du Québec, and president of the Canadian Music Council.
Papineau-Couture’s compositional style evolved gradually from polymodal and polytonal neoclassicism to total atonal chromaticism. His work is fascinating for its exploration of sonic colors, and for its subtle combination of metrical freedom with strong rhythms to support clearly articulated melodic elements.