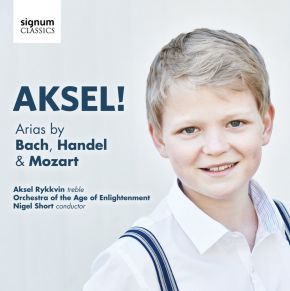 Norwegian boy-soprano Aksel Rykkvin has quickly built a reputation as a rare talent, combining an intelligent musicality with a beautifully resonant treble voice. On his debut recording he is accompanied by The Orchestra of the Age on Enlightenment under Nigel Short (leader of award-winning chamber choir Tenebrae), in a selection of arias by JS Bach, Handel and Mozart. Many of the arias performed are considered too technically demanding for boy singers in the present day – in particular Mozart’s Exsultate Jubilate which was composed for the castrato Venunzio Rauzzini, and several of Bach’s Cantatas which were written at a time when singers often maintained their treble voices until the ages of 16 or 17.