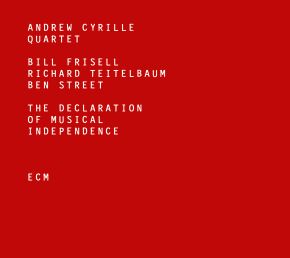 The Declaration of Musical Independence

The great avant-jazz drummer Andrew Cyrille – whose associations have ranged from a long collaboration with Cecil Taylor to co-leading the collective Trio 3 with Oliver Lake and Reggie Workman – makes his ECM leader debut with The Declaration of Musical Independence. Featuring a quartet with guitarist Bill Frisell, keyboardist Richard Teitelbaum and bassist Ben Street, the album kicks off with an artfully oblique interpretation of John Coltrane’s “Coltrane Time,” led by Cyrille’s solo drum intro. The disc then features a sequence of sonically arresting originals, including Street’s luminous “Say…” and Frisell’s deeply felt “Kaddish” and “Song for Andrew,” with Frisell’s guitar alternately cutting and billowing, the edge evoking some of his most illustrious past ECM performances. There are three atmospheric spontaneous compositions by the band – including the dynamic soundscape “Dazzling (Perchordally Yours)” -- that highlight Cyrille’s individual sense of percussive drama. Cyrille appeared on classic ECM and WATT albums by the likes of Marion Brown, Carla Bley and the Jazz Composer’s Orchestra, but this album puts a deserved spotlight on an icon of jazz drumming.