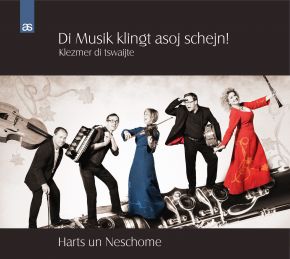 “A violin found a melody”, so it says when speaking of the origins of Klezmer music. It has been 10 years since the Klezmer ensemble “HARTS UN NESCHOME” began collecting and arranging such melodies. They have studied Jewish culture and its instrumental music, which in itself often comes with strict customs and traditions, and also have become increasingly aware of their own involvement in the revival of this culture. The overwhelmingly enthusiastic response of their concert audiences and the immense success of their first CD “From Yiddish...to Klezmer” have encouraged these Klezmorim to celebrate their 10th anniversary with the recording of a new CD, entitled “Di Musik klingt asoj schejn - Klezmer di tswaijte” (“The music sounds lovely – Klezmer, the second”). Not only can the fans of “HARTS UN NESCHOME” look forward to a new round of live concerts, as expected played with much heart and soul, but can now also enjoy their wonderful music at home.