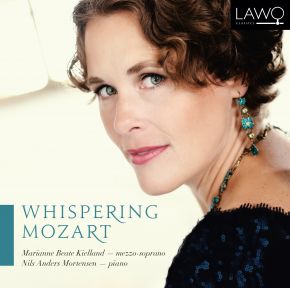 To do the songs of Mozart is indeed something of a challenge, precisely because they are so simple. Excessive pathos or outpouring of feeling is unsuitable. Emotion is to be expressed, or course, but it must be confined to the delicate and simpler limits that Mozart has established. Therefore, acclaimed vocalist Marianne Beate Kielland has chosen to title this album “Whispering Mozart,” for that is how it feels to sing this material: as though you are whispering the words and melodies to the few who have gathered in your living room to listen. Norway’s leading mezzo-soprano, Marianne Beate Kielland studied at The Norwegian Academy of Music, as well as with Oren Brown, Barbara Bonney, and Dietrich Fischer-Dieskau. She is one of few Scandinavian singers who has received a Grammy nomination for their vocal performances. She regularly performs with leading orchestras and choirs in Europe and has appeared with such orchestras as Mahler Chamber Orchestra, Anima Eterna, Os

Wolfgang Amadeus Mozart (composer)More information
28-06-2017 Music Web International
"With the support of Nils Anders Mortensen’s listened-in accompaniment and a spotless recording—not actually in her living room but a church in the north of Norway—this is now a first recommendation for a single CD with Mozart’s songs."