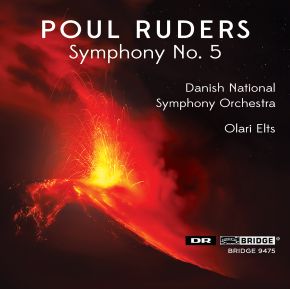 This disc presents the world premiere recording of Poul Ruders's latest symphony, completed in 2013.  The symphony, composed in three movements, is in some ways, the great Danish composer's most traditional symphony-  an explosive, quick-paced first movement followed by an hypnotically inward-looking slow movement, followed by a bristling dance finale.  Aside from its outer-trappings, Ruders 5 inhabits a sound world all its own.  The first movement's opening brass fanfare is followed immediately by startling police whistles and pounding drums-  music of volcanic power and intensity.  The slow movement employs a huge registral span, and the third movement's funky dance rhythms collide with dense harmonic underpinnings.  The work is given a brilliant reading by the Danish National Symphony Orchestra, led by the Estonian maestro, Olari Elts.  The recording was made in the Danish Radio's new concert hall, named by Gramophone, as one of the "10 best concert halls in the world".

What started with a unexpected phone call on a Sunday evening in the beginning of 2012 ends now with the release of this beautiful album from Michael Schønwandt & Danish National Symphony Orchestra. Due to the flu the original conductor for this recording had to call in sick and Michael Schønwandt was asked to fill in his place. The rehearsals where scheduled for the next day. Luckily Michael Schønwandt and the ...