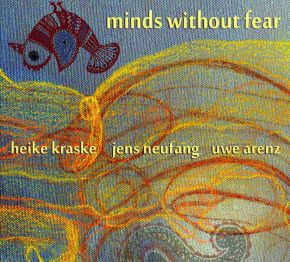 Heike Kraske and Uwe Arenz's 2011 debut album entitled King Of My Song already featured baritone saxophonist Jens Neufang of the WDR Big Band as a guest musician. Their debut release as a trio was the successful Unspoken (MONS MR 874 549), and they now present their latest album together, Minds Without Fear. Once again, and on numerous instruments, the virtuoso woodwind player Jens Neufang adds to the warm, moving voice of Heike Kraske and the dynamically sensitive playing of Uwe Arenz, the guitarist who is also responsible for the arrangements on this production. As a special guest, the three musicians welcome the tabla player Arup Sen Gupta, who enriches the title song "Minds Without Fear" and the composition "Jazz 'n Samba" with even more exceptional tones.

The trio's current production is delivered with a broad range of styles; original compositions, jazz standards, sophisticated latin and pop songs with world music influences and touches of singer-songwriter. The three musicians produce their own soundscape and surround it with complex rhythms, swinging grooves and nuanced improvisations.

The instrumentation on this production is remarkable. In addition to four different guitars, there and three different woodwind instruments plus tabla and shaker. This allows the minimalist trio line-up to achieve an amazingly varied range of sounds. The unifying element running through this multiplicity of sounds is Heike Kraske's incredibly expressive and moving voice – whether performing lead or scat vocals.

Subtle, finely etched interludes within the musical interplay are the trio's stand-out feature.

The pieces also vary thematically. "Minds Without Fear" was originally conceived as an instrumental piece, but has since received a text by the Indian poet and philosopher Rabindranath Tagore. Charlie Haden's "La Pasionaria" seems to have been waiting for text by writer Sarah Margeret Fuller -  it fits so naturally into this arrangement of the classic.

From "Die Sprache des Regens" (The Language of the Rain) by Michael Kunze to Baden Powell's composition "Canto de Ossanha", the series of songs with poetic appeal continues on.

The fact that the three musicians have a real soft spot for the Beatles, and that they know how to harness this in a virtuoso and uniquely individual way, can be heard on both "Mother Nature's Son" and the rocking and swinging "Got To Get Into My Life".