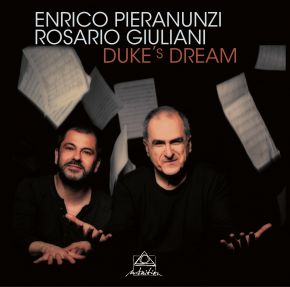 For Enrico Pieranunzi and Rosario Giuliani, their reflections on the music of Duke Ellington provide a vital impulse for a musical process in which they re-imagine the Duke’s music, make it contemporary, and give it fresh new colors. Duke’s Dream opens a window and offers us a seat in a train that not only connects two parts of a city, but also one type of culture with another. Trains begins with the A Train to Harlem, but it also suggests other trains and other trains of thought.

Enrico Pieranunzi has had a long musical career with experiences deeply rooted in the history of jazz. In his youth, he played with Chet Baker, worked with many legendary jazz performers on stage and in studios, later wrote a book about Bill Evans, and today is himself considered one of the grandees of jazz. In Rosario Giuliani – eighteen years younger than himself – Pieranunzi has met a musician with the same urge to achieve authentic expression. Both know that a tribute album would only be a pale imitation of the figure being honored if it didn’t include something personal. A successful homage, in spite of all its affection, is always to some degree a self-portrait. This is also true for Pieranunzi’s musical involvement with Bill Evans, Thelonious Monk, Lennie Tristano, Charlie Parker, and Wayne Shorter, as well as his excursions into the sound worlds of Domenico Scarlatti and Federico Fellini.

Now we come to Duke Ellington, and that with good reason. Today, if one looks at this wonderful music, which we have become accustomed to call jazz, one discovers an astonishing coherence and consistency – in spite of clear distinctions between what is traditional, what is modern, and what is avant-garde. One feels Duke Ellington’s strong, warm heart at the center of it all. With their European background, Enrico Pieranunzi and Rosario Giuliani approach a cosmos that is a counterpart to their heritage: the classics of Afro-American music. Although much respect is in play here, the duo is not blinded by their admiration. They allow their own experiences to come into play, including those with contemporary jazz, which lets them approach Ellington’s music in new and sometimes astonishing ways. This begins with the treatment of the themes, and leads to new harmonic interpretations, rhythmic refinements, contrapuntal dialogues, and melodic inventions.

The two revel in an atmosphere that has rightly been called “Ellingtonia”. There are ballads and blues, dancing exuberance and lamentation, spiritual feeling and tonal audacity – all based on a swing feeling that, though not always explicitly formulated, is consistently imagined and felt.

This is a colorful world with its own rules, its own freedoms, and above all its own sound. The material for the “dream” is something emotional and congenial. In this sense, the Duke’s dream is humanistic and universal. Enrico Pieranunzi and Rosario Giuliani know how to enter this dream and carry it on. This allows them to create a new music in the Duke’s spirit. The element of poetry is essential for Pieranunzi, also in music; one of his pieces is even called “Don’t Forget the Poet”. And it is no accident that Ellington’s compositions are often referred to as tone poems. Just like Ellington’s pieces and suites, the dialogues between Enrico Pieranunzi and Rosario Giuliani are filled with fascinating characters, poetic images, and scintillating stories. Duke’s Dream is an invitation to indulge one’s own fantasy.