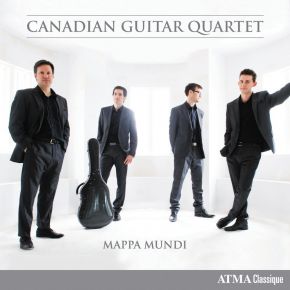 “The Canadian Guitar Quartet tackles all with great brilliance and an optimal mastery of their instruments.” (GuitArt magazine – Italy)
For its first album on the ATMA Classique label, the Canadian Guitar Quartet pairs works by contemporary composers Renaud Côté-Giguère, Patrick Roux, Hans Brüderl and Christine Donkin with Vivaldi’s Concerto R.V. 531 in an arrangement for four guitars by Bruno Roussel.
Since its debut in 1999, the Canadian Guitar Quartet has toured extensively in North and South America. Their concerts in some of Canada’s most prestigious halls, including the Winspear Centre, the Palais Montcalm, the Glenn Gould Studio, and the National Gallery of Canada, as well as performances at such events as the annual convention of the Guitar Foundation of America, Yale’s Guitar Extravaganza, and the Norfolk and Ottawa chamber music festivals, have built an international reputation for the Quartet.