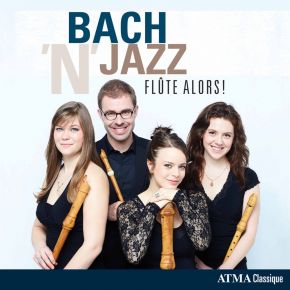 Bach 'n' Jazz marks the recorder ensemble Flute Alors! first album with ATMA Classique. They perform an eclectic mix of Bach's music and jazz standards. Tunes like Night in Tunisia or Fly Me to the Moon are paired with fugues and concerts by Bach to give these dated tunes a modern feel. This playful juxtaposition reflects both the timelessness of Bach's music and they many connections between baroque music and jazz. Dynamic and versatile, Montreal-based ensemble Flute Alors! is composed of four new-generation recorder players. Unique in its category, the ensemble is the only professional recorder quartet in Canada. Flute Alors! often collaborates with other artists from diverse backgrounds. The group frequently commissions pieces for recorder ensemble from the new generation of composers, in addition to creating their own arrangements. Flute Alors! has been awarded prizes and nominations at the national and international level. The ensemble has been featured in numerous mu