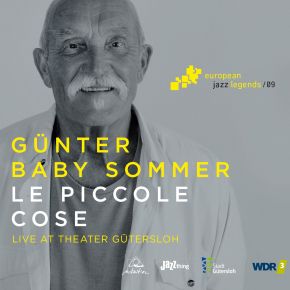 This release of Gunter “Baby” Sommer is the ninth publication in the “European Jazz Legends” series. “We are called Gunter Baby Sommer’s Quarteto Trionfale,” the 73-year-old drummer said right before this concert to make sure the band would be announced correctly. “You know, like Art Blakey’s Jazz Messenger’s.” The fact that Sommer feels a deep connection to the African-American roots of Jazz also resonates in his nickname, which can be traced back to Louis Armstrong’s drummer “Baby” Dodds. It is no contradiction, that this “Baby” belongs to the generation of East German musicians, who, some forty years ago, caused a stir with their mostly improvised music in and around what was then the GDR. As a sound artist in general and a percussionist in particular, as a soloist or an instrumentalist in an ensemble, Sommer is and has always been interested in widening the instrumental range of his drumset and discovering new repertoire. For his concert