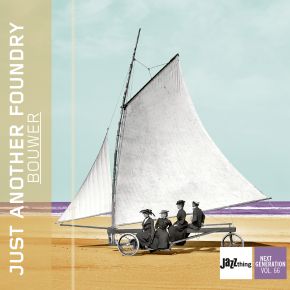 'Just Another Foundry'. Apparently not the worst choice. The group with shared interests won the 2015 Osnabrück Young German Jazz Award, the Grand prix in Avignon and recently the Maastricht Jazz award. This is how 'the future of jazz in Germany' sounds, as the Süddeutsche Zeitung euphorically formulated it. Three adventures pool their talents and have now even released their first recordings. Engel, Herzog and Greminger are concerned with diversity, shapeliness and above all, cultivation of their individual roots. JAF have long considered themselves as a homogenous organic unity and not as a combination of ambitious soloists and egomaniacs, which clearly sets them apart from the sea of sand grains. With one voice, they tell their stories, change tempos and keys depending on their feelings, juggle precariously between atonality and melodiousness as well as between speed-swing and ballads. Always remain unpredictable, and in no case let themselves be fit into any template: the saxophonist, bassist and drummer want to maintain this principle at all costs. It's all about authenticity. About uniqueness.