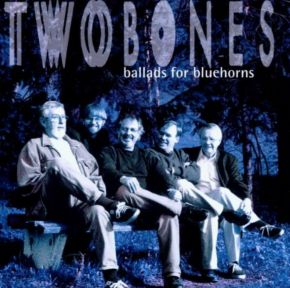 Upon leaving the famous "Village Vanguard" jazz club in New York City, a well known trombonist stumbled over a homeless person, who, pointing at his trombone case, said: "Do they still manufacture those things?" We've got news for him. Not only do instrument makers continuosly produce "those things", you will find two expert trombone s and, surprise, surpise, play them! On this album, you will find two expert trombonists -  and a halff. this may sound a bit awkward, but is easily explained: Bassist Isla Eckinger likes to pusue certain electic ways of being by mastering several instruments: bass, very evident, trombone, evident on two track, and vibes, to remain unused! But getting back to the main prtotagonist of this date: Danilo Moccia and paul Haag, i.e. "Twobone", the gentleman, who, in spite of mild ignorance and often noticeable attitude of disbelief on behalf of parts of the audiene, have dedicated ther musical life to this difficult to handle instrument. An admirable tak, performed with even more admirable task, performed with even more admirable stance, dexternity and know how.
Meet two dedicated trombone players! Aside from the trombone, there is hardly any other wind instrument capable of transmitting beautiful slow ballads, resembling in tone very much to the cello. Agreeable, the player must be able to project that warm, intriguing and mellow sound only a trombone can offer - except when on duty at Jericho, to blow those famous walls to pieces...!
Since the two exponents answer to the challenge of smoothness with utmost competence, both the choice of material as well as its interpretation appear convicingly adequate, delicate and are rendered with that special extra feeling only a seasoned jaz player is able to afford when called upn to deliver a ballad.