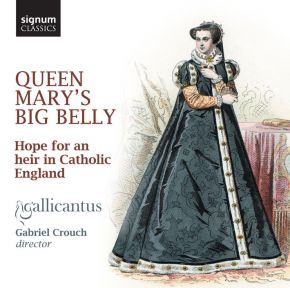 Gallicantus performs music surrounding the fascinating yet tragic story of Queen Mary Tudor's 'phantom pregnancy'. On April 30th, 1555 the city of London celebrated the birth of a health male heir, but abruptly ceased the next day after the news was revealed to be nothing but rumor. There was to be no heir, with gossip and speculation surrounding the tale of Mary's pregnancy from that day onwards. The music performed here resonates with the circumstances of the mid 1550's, including items composed outside of Mary's reign: from the royal ceremonies in which Mary participated as queen, and music directly tied to the specific events of 1554-1555. This includes a newly-reconstructed Litany which was performed during Mary's assumed pregnancy. The viewpoint shifts from the streets of London and its suburbs, through the ceremonial grandeur of the royal palaces and their chapels, to the intimacy of the Privy Chamber itself.