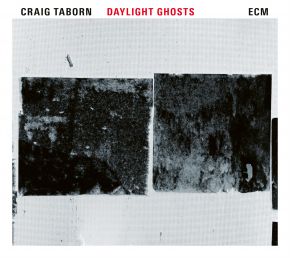 Keyboardist Craig Taborn’s Daylight Ghosts is the Minneapolis-bred New Yorker’s third ECM release as a leader, a quartet album following the solo Avenging Angel and trio disc Chants. Both projects earned wide acclaim, with The Guardian saying that Taborn’s “musicality and his attention to detail are hypnotic, as is his remarkable sense of compositional narrative within an improvised performance.” Along with the questing Taborn on piano and electronic keyboards, the quartet of Daylight Ghosts features two other luminaries from the New York scene – reed player Chris Speed and bassist Chris Lightcap – plus drummer Dave King, the leader’s fellow Minnesota native and one-third of alt-jazz trio The Bad Plus. Each player draws from a broad artistic background, as informed by rock, electronica and diverse strains of world music as they are the various permutations of jazz improvisation. Dynamism and spectral ambience, acoustic and electric sounds, groove and lingering melody – all come together to animate Daylight Ghosts.


19-06-2017 Jazzism
"Daylight Ghosts is above all an expression of Taborn's own, very strong idiom, but can also be traced back to influences by avant-gardists such as Cecil Taylor, Anthony Bracton and Henry Threadgill. "
15-04-2017 CuttingEdge
"

On 'Daylight ghosts' he cuts with stereotypes compositions , conservative improvisations and conventional interplay. Moreover, he integrates electronica and imparts a musicality that falls between the folds of styles.

Daylight Ghosts is, for now, the major opus of Craig Taborn but, judging by the impressive qualities we hear here, it will be far from the last.