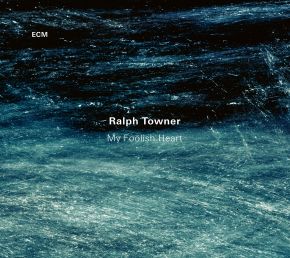 After critically-lauded projects with trumpeter Paolo Fresu (Chiaroscuro) and with fellow guitarists Wolfgang Muthspiel and Slava Grigoryan (Travel Guide), Ralph Towner returns to solo guitar for My Foolish Heart. Whether on classical guitar or 12-string guitar Towner’s touch is immediately identifiable. Solo music is an important thread through his rich discography and this new album – recorded at Lugano’s Auditorio Stelio Molo RSI in February 2016 and produced by Manfred Eicher – follows in the great tradition of Diary, Solo Concert, Ana, Anthem, and Time Line. It features finely-honed new compositions as well as a pair of tunes (“Shard” and “Rewind”) from the songbook of Oregon, a dedication to the late Paul Bley (“Blue As In Bley”) and a single standard – Victor Young’s “My Foolish Heart” which Towner first came to love in Bill Evans’s interpretation.

Ralph Towner (artist)More information
Ralph Towner (composer)More information
10-07-2017 Written in Music
"Towner knows how to keep a beautiful balance between classical, folk and jazz music. The song ''Two Poets'' sounds like a poem with music."
10-03-2017 Nederlands Dagblad
"(...) Ralph Towner is coming closer to the essention of is own music (...)"
06-03-2017 Jazzflits
"(...) This album is an indication of his works and filled with calm, harmony and inner balance (...)"