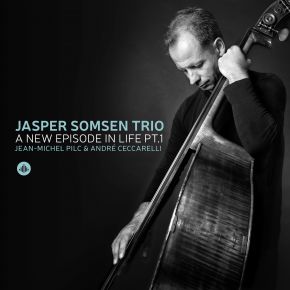 It's no coincidence Jasper Somsen's 3rd (and later this year 4th) Challenge Records album features an international piano trio line up. Recent years performing and/or recording in trio with a.o. Enrico Pieranunzi, Joey Calderazzo, John Beasley, Jeff Ballard, Justin Faulkner and Andre Ceccarelli, he is much sought-after by pianists. The former New York, now Montreal-based French master pianist and composer Jean-Michel Pilc and one of Jasper's all-time favorite French drummers Andre Ceccarelli joined him for this diptych. At their first encounter ever, this trio with Jean-Michel Pilc and Andre Ceccarelli recorded A New Episode in Life Part I & A New Episode in Life Part II in just two days. The album contains nine melodically strong instrumental compositions by double bass player, Jasper Somsen. Transparency is the key word in musical expression and form throughout the entire album, similar to songs without words.

Jasper Somsen Trio (orchestra)More information
07-02-2018 Draai Om Je Oren
"A fresh and surprising combination, this trio. It takes you to the beauty of the music, where you also regularly sit on the edge of your chair."
10-11-2017 Trouw
"The poetic melodies seem to float over the soft breeze of Andre Ceccarelli 's drum sound,
providing the perfect texture for Jasper Somsen 's deep and dark bass sound.
Jean-Michel Pilc's imaginary musical realm and sense of dynamics is full of suprises.
Even more impressive is the seemingly effortless interplay with Somsen and Ceccarelli."

01-11-2017 Jazzthing
"A creative impulse leading to a chain reaction between these three improvising musicians.
Their music descending to depths where there are no limits in time and space."

08-09-2017 Nederlands Dagblad
"On A New Episode In Life, the combination is so tight that it's hard to contain that Somsen and Pilc never met before."
01-09-2017 Jazzbullitin
"Two days were devoted to record a CD, but after one day was A New Episode in Life Pt. 1 is already on."
19-06-2017 Jazzism
"An intriguing trio: intelligent, balanced and often poetic."
05-06-2017 Rootstime
"A real pleasure to listen to this CD, time after time, it only makes the desire for part 2 bigger."
01-06-2017 Music Emotion
"Outstanding production that can not be missed in any music collection"
01-06-2017 Jazzpodium
"Piano-Trios à la carte"
01-06-2017 HiFi Stars
"A nice trio album, which will also be liked bij the friends of Nordic jazz."
30-05-2017 Medienhaus Bauer
"... a consistently exciting piano trio album is finished"
01-05-2017 Jazzflits
"The album was recorded in just one day, while the part that will be released in autumn 2017, "Pt.2" is recorded in only six hours. That's very promising!"
07-04-2017 Trouw
"The poetic melodies seem to float over the soft breeze of Andre Ceccarelli 's drum sound,
which gives the perfect texture for Jasper Somsen 's deep and dark bass sound.
Jean-Michel Pilc's imaginary musical realm and sense of dynamics is full of suprises.
Even more impressive is the seemingly effortless interplay with Somsen and Ceccarelli. "