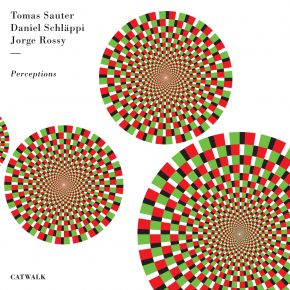 A wonderful album, with some masterworks ... World class made in Switzerland Weltwoche CH, Highlight in chamber jazz ... manifesting the European jazz Westzeit D

With such and many other compliments, the culture media have considered the first album of the famous trio that appeared on the label CATWALK in 2011. It was the first CD release with Jorge Rossy on drums of the post Brad Mehldau era and presented the excellent drummer in a trio with Tomas Sauter (g) and Daniel Schläppi (b). The three musicians have made an outstanding reputation for themselves as virtuoso instrumentalists and bandleaders for many years now. In 2013 the brilliant triumvirate publishes its second CD Perceptions, whose title refers to the infinite variety of possibilities of sensual perception. And in fact the album offers a great number of striking tunes.

Sauter and Schläppi have played innumerable concerts together as a duo, and brought out two CDs, Indian Summer (2006) and First Day in Spring (2011), which were highly acclaimed by both public and experts. In trio with Jorge Rossy, the result of this long-term relationship can still be heard and gains a further dimension in its union with the brilliant drummer. Although all the musicians can let their artistic inspiration run free on this production, the three professionals obtain an amazingly compact and original band sound.

With the new CD Perceptions, the European jazz scene is giving a very strong signal to the New World. This music catches the listeners attention from the first to the last note. Not just because of the wonderful way the musicians play, but also because of Tomas Sauter's refreshing and authentic compositions. His pieces are at times impressively modern, at times light as ballads but they are always captivating and of a timeless beauty.