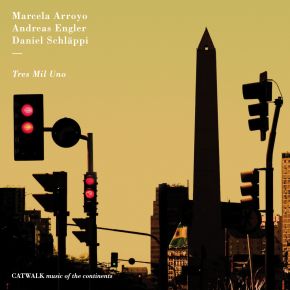 Tres Mil Uno - how will music and the world be in the year 3001? On their new album, Marcela Arroyo, Andreas Engler and Daniel Schlappi express their thoughts on where the musical journey might lend. Following their first album Tangomoods, which was hailed by the media as one of the genre's ''most captivating records of the year'', and a ''sonorous, intimate outing'' showcasing ''outstanding musical talent'', the new album is further proof of the trio's unique interpretation of their art, honed through many years of playing on stage. The album Tres Mil Uno sees Puerta Sur transcending boundaries with gusto. South America is even more present: beautiful, rarely played songs from Argentina sit alongside tracks steeped in musical tradition from other parts of South America and Europe. Menos es Mas, music normally characterized by lush orchestral landscapes, has been stripped to its bare essence. This new delicate, yet full-sounding approach does away with superfluous ornamen