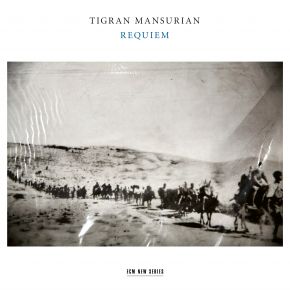 Tigran Mansurian has created a Requiem dedicated to the memory of the victims of the Armenian Genocide that occurred in Turkey from 1915 to 1917. Co-commissioned by the Munich Chamber Orchestra and the RIAS Choir Berlin, Mansurian’s Requiem reconciles the sound and sensibility of his country’s traditions with those of Western practices, the combination of ancient Armenian religious and secular music with the Latin Requiem text “giving rise to something unexpected,” the composer says. This is profoundly moving contemporary composition, illuminated by the “glow of Armenian modality,” as Paul Griffiths puts it in his booklet essay. The work is a milestone for Mansurian, widely acknowledged as Armenia’s greatest composer. The Los Angeles Times has described his music as that “in which deep cultural pain is quieted through an eerily calm, heart-wrenching beauty.”

Anja Petersen (artist)More information
Andrew Redmond (artist)More information
Tigran Mansurian (composer)More information
Alexander Liebreich (conductor)More information
RIAS Kammerchor (orchestra)More information
Münchener Kammerorchester (orchestra)More information
19-05-2017 Luister
"Contemporary without being revolutionary, it's harmonious music ..."
01-05-2017 Rootstime
"Certainly no music to start the day cheerfully, but a welcome contribution to those contemplative moments in which a human being thinks about all the misery caused by the same homo sapiens, and that shows inexplicably."
09-04-2017 Diskotabel Radio 4
"I like this recording and I am very interested in the music of Mansurian. The use of the different voices and the solo strings and also a larger ensemble who perform this magnificently. I am an ECM fan myself, it is all about taking the room that you are in, and use this in a very natural and honest way.
Sven Arne Tepl"

"
10-03-2017 Opus Klassiek
"(...) We are in fact, constantly on the edge of resistance and resignation, progression and stagnation, hope and assurance, in a musical language which speaks directly, and partly by the outstanding elaborated instrumental frame, it makes a deep impression. (...)"