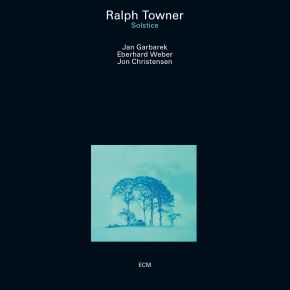 Down Beat: “Solstice inspires through its expressive openness… revealing depth of texture, nuance and meaning.” Perfect Sound Forever: “The LP is not only one of the moodiest ever published by ECM, but by anyone.” Solstice, recorded 1974, belongs to the great early production projects of ECM, with a new band formed in the studio. It’s the first of Towner’s recorded encounters with the European players, and this US-Norwegian-German quartet has a character all its own. Ralph’s synthesis of classical guitar technique and jazz improvisational skills inspires all participants on now-famous tunes including “Nimbus” and “Oceanus”. (Many future associations grew out of this meeting, including the Garbarek/Towner collaboration on Dis, and the integration of Eberhard Weber into the Jan Garbarek Group, and of Jon Christensen into Weber’s Colours band.)