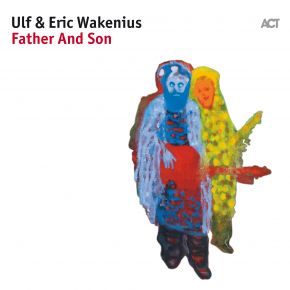 “He plays the guitar like he was born with it already in his hands” was how John McLaughlin once praised Ulf Wakenius. What is true for the father might be even more true for Ulf’s guitarist son Eric, who probably was quite literally born with one. “Eric really is a blessing”, says Ulf Wakenius. “We have shared many concerts all over the world and it has always been a pure joy!” So the time is clearly right to document this family saga: “Father And Son” is a virtuoso conversation in the art of contemporary jazz guitar. This duo can launch into swing mode, or strut out towards rock, they are capable of being both lyrical and percussively extrovert, they can dream ballads or go at breakneck speed. And whether they are telling tales of exotic lands or contemplating their native Sweden, the pair — with their instinct for atmosphere, their sensitivity to acoustics and balance — make soul-stirring, affecting and compelling music, in which the listener can detect the closeness of their connection to each other. The musical backgrounds of father and son are very different. Ulf Wakenius had ten years as a member of the Oscar Peterson Quartet and also worked with the two legends of the bass, Ray Brown and Niels-Henning Ørsted Pedersen. He is known for his collaborations with great jazz figures such as Pat Metheny, Michael Brecker and Michel Legrand, and of course for his work with the singer Youn Sun Nah. He is not just one of the most busy and in demand players, but also the most creative jazz guitarists of our era. His son Eric, by contrast was born in 1988 and surrounded as a teenager by the rock and pop music of the nineties. After that, he spent a lot of time in Los Angeles, where he picked up many different stylistic directions from that city’s musical melting pot. “He has played a lot of electric guitar”, explains Wakenius, “but — like me — he has fallen in love with the acoustic guitar and its many possibilities.” The two guitarists take the opportunity on “Father And Son” to explore and to exploit these multiple possibilities to the full: “Irish Vagabond” combines fullon Irish folk music with Arabic elements. “Mistral” is rhythmically punchy, almost like a rock tune, and also has echoes of Al Di Meola. In this tune Ulf Wakenius recounts an experience he had while on tour with Youn Sun Nah. At the Avignon Festival, a powerful wind from the South “almost blew me off the stage, so I decided to write a song about it.” Their “Eleanor Rigby” is captivating; as they honour the Beatles, they achieve a sonority remarkably close to a string quartet. “Paco’s Delight” pays tribute to the unforgettable Paco de Lucía, but their Spanish flamenco technique is also imbued with the buoyancy and verve of Django Reinhardt’s Hot Club swing. With their arrangement of the jazz-fusion classic “Birdland”, Ulf and Eric Wakenius remember another of the pantheon of musical immortals, Joe Zawinul. And finally, Eric Wakenius takes the listener by surprise as a highly persuasive singer in the album's title track by Cat Stevens, which deals with a tricky father-son relationship. “Eric and I are luckier - we don't have those problems,” says Ulf Wakenius. The song also justifies its place in the selection because Cat Stevens has a Swedish mother and a close connection to Sweden.